As Cape Town expanded, habitat along its perimeter began to diminish. The chacma baboons, once restricted to the hills and mountains surrounding the city, began to move to the interior of the city in search of food.

Enticed by anthropogenic food sources and emboldened by a lack of natural predators, the baboons became increasingly aggressive. This led them into near-constant conflict with humans living at the foot of Cape Town’s mountains, as they regularly raided picnics, tourist traps, cars, homes, and even people’s grocery bags as they searched for calorie rich, easy-to-attain anthropogenic food.

Attempts to dissuade the baboons proved futile. Guards armed with paintball guns, meant to pose as rival troops and scare away the baboons, did little to affect them. While they could not explicitly understand that their dwindling populations in the Cape Peninsula has garnered them protection from humanitarian and conservation groups alike, they do understand that the vast majority of humans they encounter will not use lethal force. With no natural predators, such as lions and leopards, left, the chacma baboon troops have become increasingly emboldened and, as a result, increasingly aggressive.

Source: eNCA, “Paintball Guns Used to Get Rid of Baboons.”

To form the basis for our critique, we examined the Chicago Urban Coyote project and its efforts to create range maps by geotagging various coyotes in the city of Chicago. The maps revealed several unique points of the coyotes foraging behavior in an urban ecosystem, such as smaller territories, more sporadic movement, and more overlap in ranges. However, they did not, and could not, account for the added layer of human interaction only an urban animal would encounter. 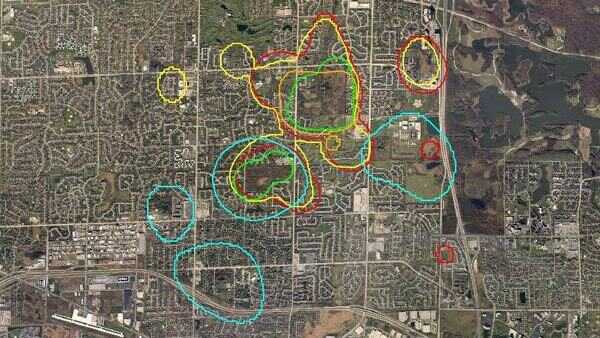 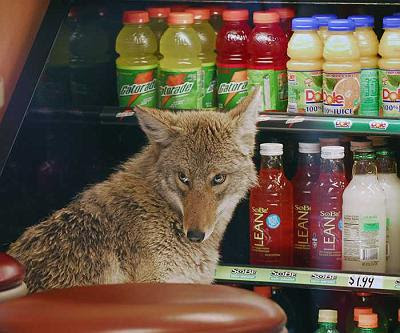 Take, for example, the infamous incident of the coyote in the Quizno’s coke cooler. The coyote, searching for a place to cool itself on a hot summer day, entered a Quizno’s in downtown Chicago and promptly climbed into the coke cooler. While the range map shows where this coyote may be in the plan view of the neighborhood, it fails to capture the intimate realities of cohabitation between people and wildlife that occur at the architectural and personal scale.

Today, there are about 16-17 baboon troops that roam the South African Peninsula. 11 troops of baboons are actively managed by baboon rangers. These 11-troops actively patrol Cape Town, stealing from garbage cans, cars, and even homes in order to find food. To manage and live with these animals, we must reconsider how we understand them. To do this the typical range map must be extrapolated and challenged, being rebuilt along ideas of animal behavior and a layer of human interaction unique to the urban ecosystem. 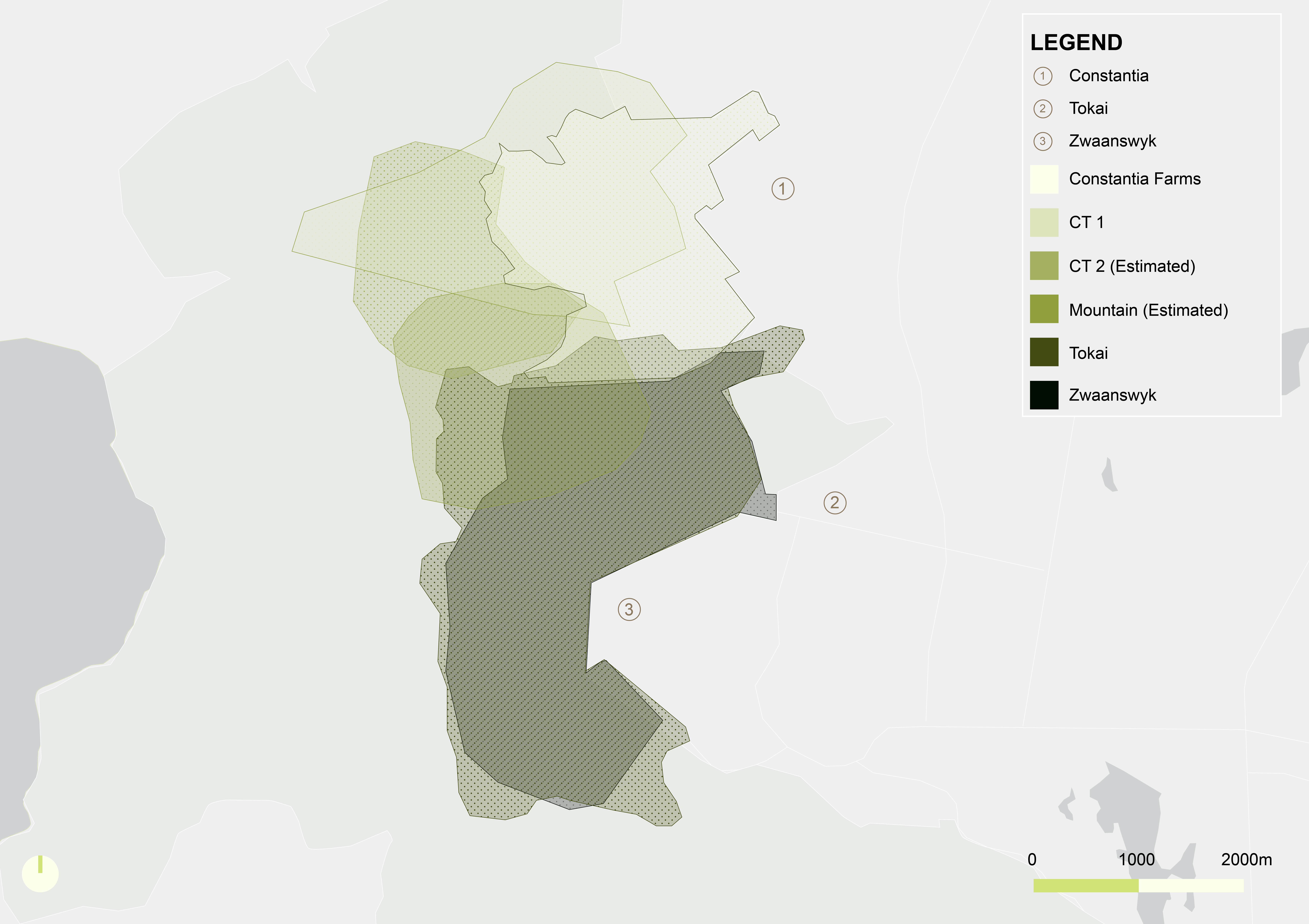 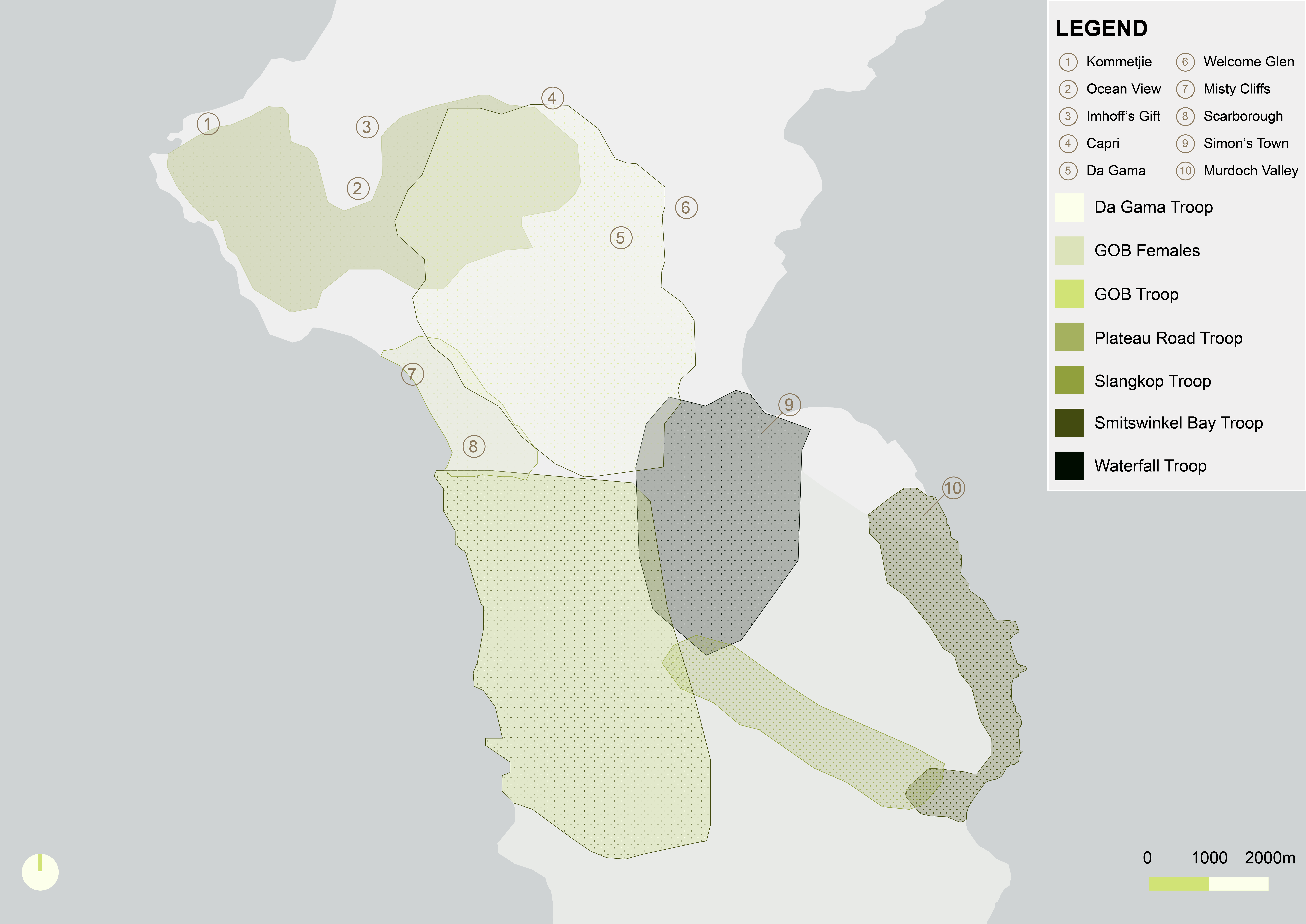 A range map proves especially limiting when studying Cape Town’s urban baboons, whose confrontational nature, as well as frequent use of homes and other buildings as foraging habitat, demands study in:

To better understand these animals and facilitate a more peaceful co-living arrangement, we propose a methodology that utilizes behavioral algorithms to predict their movements at a more intimate, and 3-dimensional, scale. Compiled alongside found videos, images, and experiential diagrams, the baboon moves from the abstract of the 2d-range map to a fleshed-out, living creature whose complex decision making and behavior can be better understood.

To produce our predictive range map model, we followed a basic patch selection model. The model typically calculates the attractiveness of a patch through multiplying abundance of food by chance of predation by net energy gained, or total energy gained from a piece of food minus the energy spent to get it. With little to no predation as result of laws outlawing the hunting of chacma baboons on the Cape Peninsula and no natural predators such as lions or leopards left, we chose to focus on abundance of food as our primary attractor.

To understand the foraging habits of the baboons and their favorite targets, we then spoke to Cape Town resident Kiki Ramaphosa. Ramaphosa informed us that favorite targets were tourist-heavy areas, such as resorts and wine farms, that produced high amounts of food-waste while also hosting easy targets in the form of unaware tourists. Picnic areas were another favorite target, and baboons were, in general, only observed around natural areas. 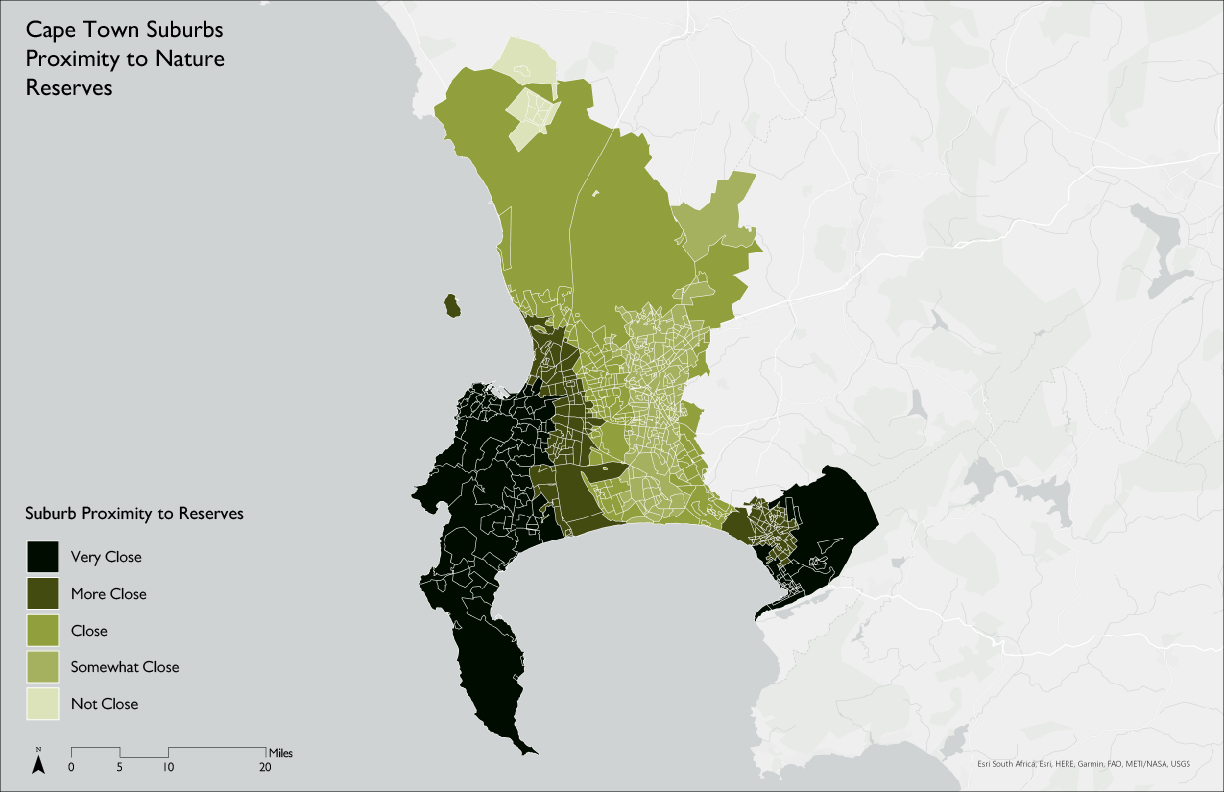 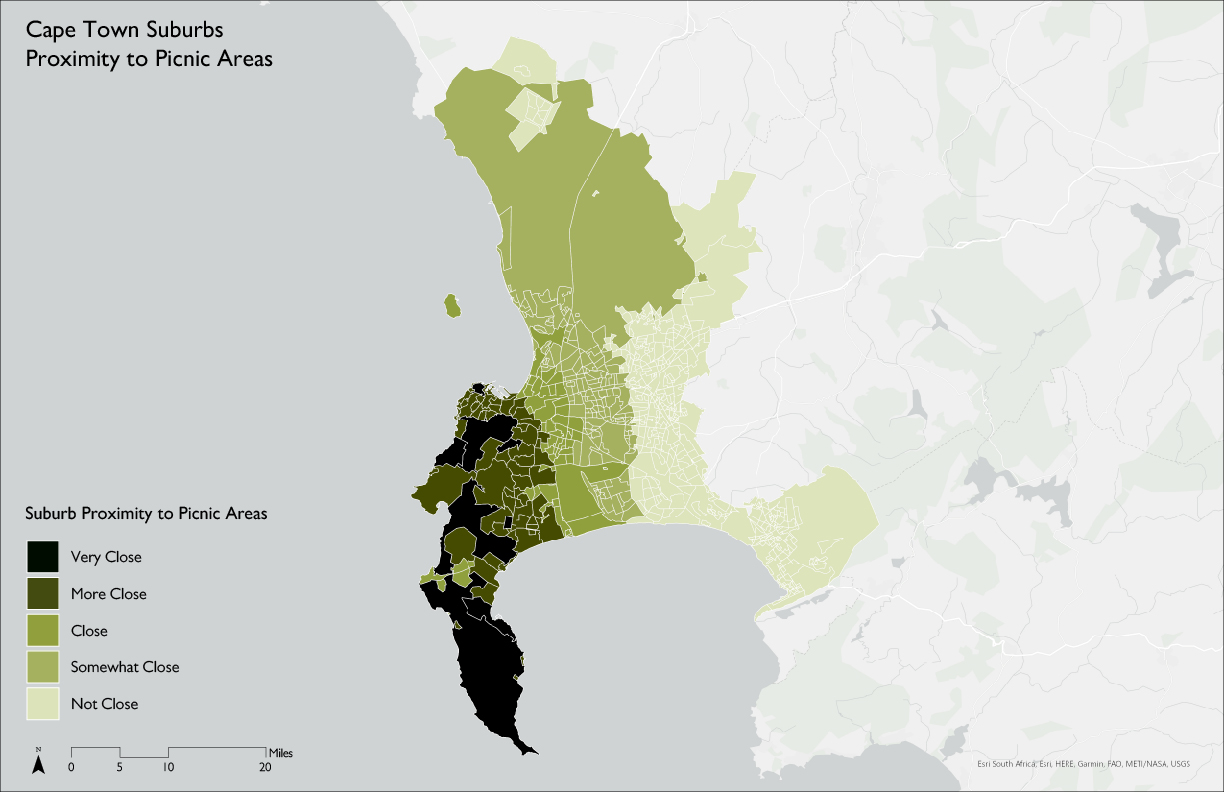 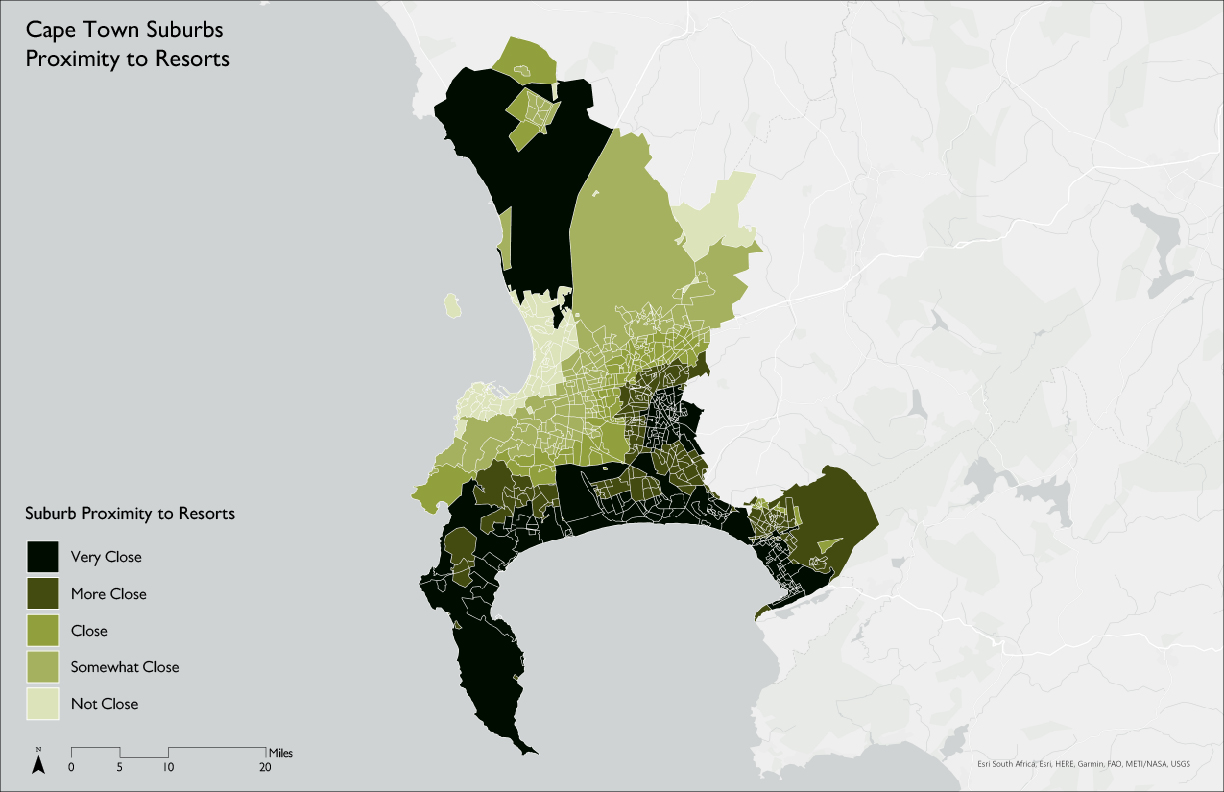 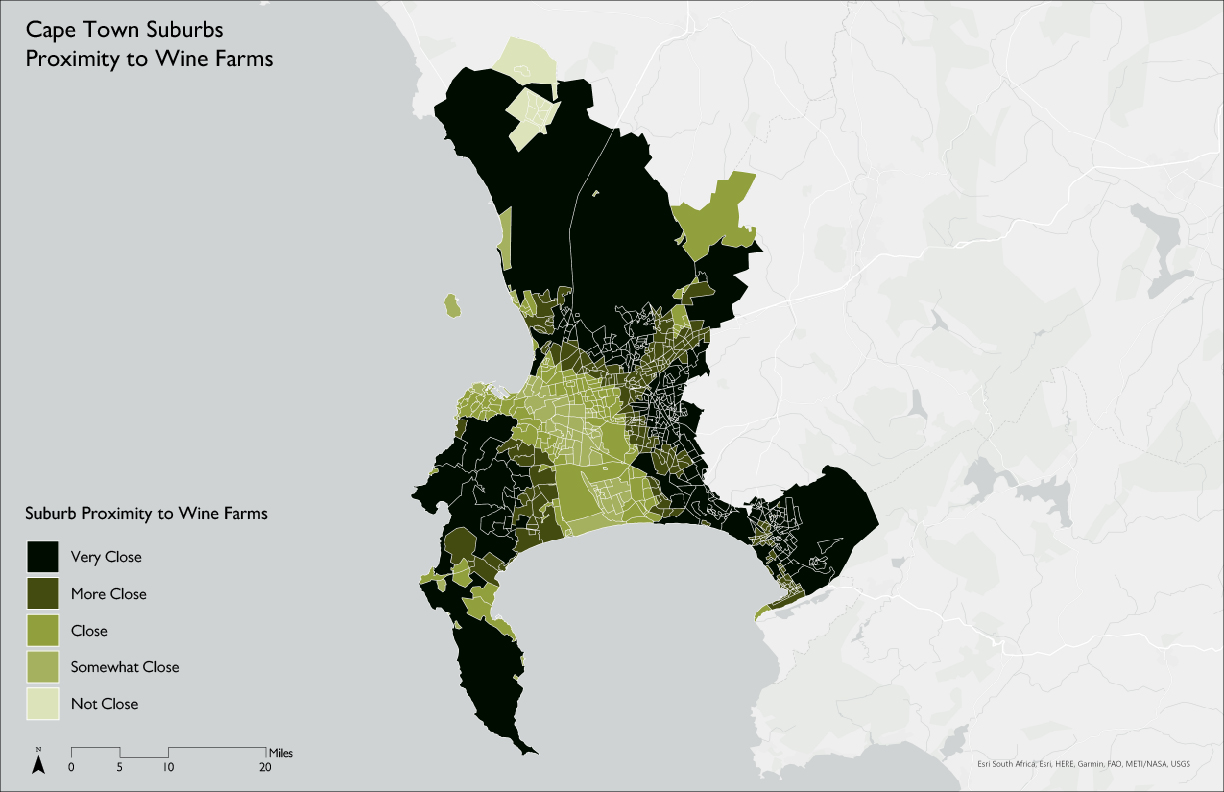 Our model was then created by utilizing Cape Town’s official planning suburbs as the patches to be selected from. A suburbs proximity to a nature reserve was the most heavily weighted factor, while its proximity to, and abundance of, picnic areas, wine farms, and resorts were weighted evenly. Our final findings from this suitability model proved consistent with information learned from Ramaphosa, in that wealthier neighborhoods adjacent to nature reserves, such as Constantia, were most often foraging habitat for the chacma baboon troops. 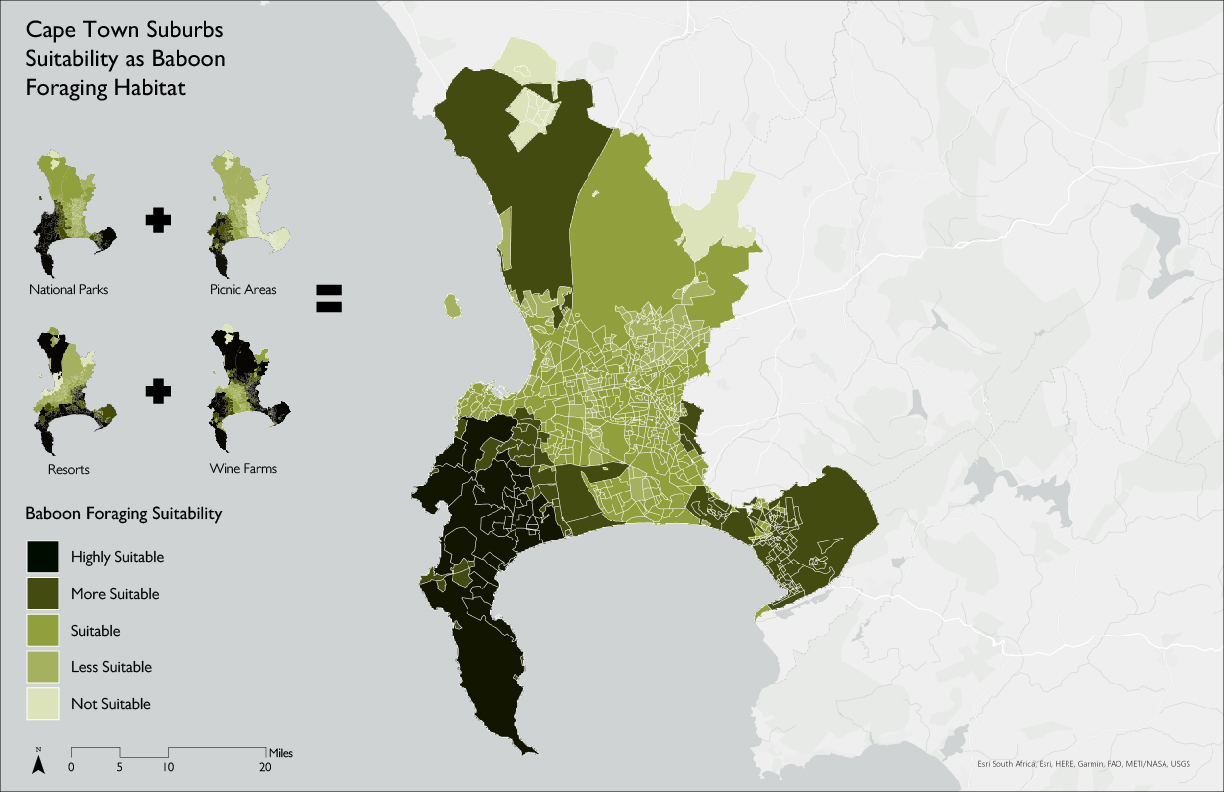 The neighborhood of Constantia was then selected to explore potential pathways the troops may take when moving from Table Mountain to the neighborhood and then back again. 10, random agents were assigned on a piece of topography containing a portion of Table Mountain and all of Constantia, with each representing a potential pathway a troop could take when searching for food. Slope was used as the determining factor in how baboons chose to move, with agents reaching their lowest points searching for higher points to jump to, simulating moving back up the mountain, and high points moving lower, simulating searching for food. To eventually improve on this simulation further, architectural forms themselves will be weighted as points attractors that draw agents in. Issues with agents being particularly attracted to the edge of the 3d-model will also be addressed. Regardless, this portion of the model works to inform pathways baboons are likely to take as they understand foraging as a gradient from high-to-low, or mountain-to-neighborhood.

Finally, our patch selection model was used to animate baboons moving on an interactive, topographic model of Cape Town in suburbs they were likely in. Each moving baboon within this model was then tagged with a video of what possible encounter may occur at each location, showing the baboon in a more intimate, personal level of detail than the typical range map could. Busses, cars, and trains were added to show contrast to the baboons in the environment, as well as provide a relative comparison to see their speed.

The goal of this project is to convey the experience of living with the urban baboon. In order to convey this experience, we begin zooming into the architectural scale. Through video research and data from baboon management organizations, we begin to understand how the baboons were inhabiting and moving across the urban and suburban fabric.

We found that roofs and lawns were frequently used for quick entrances and exits when raiding homes, garbage cans, and cars, especially when confronted by people or dogs. Using the wealth of video sources that circulate online, we then proceed to categorize where humans come into contact with baboons.

Further exploring where baboon encounters may occur at the human scale, we sourced data from the Human Wildlife Solutions Cape Peninsula Baboon Management Annual Report. Through this report and reflected in our own analysis, we learned waste management, particularly in the South East region, continues to be a major issue in baboon affected areas. The report goes on to prioritize community awareness through addressing and changing human behavior around baboon-affected areas of the Peninsula.

Our project attempts to further capture the human experience in order to help curb human behaviors towards baboons in affected areas. Using the Cape Town 24/7 Baboon Hotline call data and research from The South African Baboon Forum, we have identified typical urban spaces where encounters happen and conveyed what to do in these scenarios according to the [Roo Els Conservatory] (https://rooiels.weebly.com/baboons.html)

Five Urban Categories and What to do in an Encounter:

According to the Roo Els Conservatory, please click through the image below for some tips on Baboon-proofing your home. See more information on Baboon Page.