Investigating how elements within the built environment heighten police violence.

The Murder of George Floyd

The built environment has been a constant character in the story of violence against black bodies here in the US. The idea of space and who has access to it, in what manner and at what times is at the center of this story as well. The most persistent space that African Americans have demanded to be a part of is the ideological landscape of American Democracy these ideological battles however, manifest themselves in the material world in spaces that have been perceived as the singular dominion of white people. Wherever we look the built environment is there. Often, we have seen the built environment used as a tool against the African-American and other marginalized communities. The two elements at play here are the built environment and the police. First the slave catcher, then the overseer, and finally the police officer, have always been charge with the responsibility of limiting the free movement of black people in America. They have been charged with protecting property and space and the result of this intense interaction is often death. The events surrounding the murder of George Floyd resemble many other murders of unarmed black men, boys, women and girls by the police. The setting is often similar and the perpetrator is constant. The story of George Floyd is not unique, however the response of the masses has caused the world to take a closer look at the relationship of the police and state violence against black people. We are well aware of the social and economic conditions that require the police to occupy communities of color and abuse its residents. But now we will explore what are the elements of the built environment that heighten the possibility of negative interaction between the police and people of color. 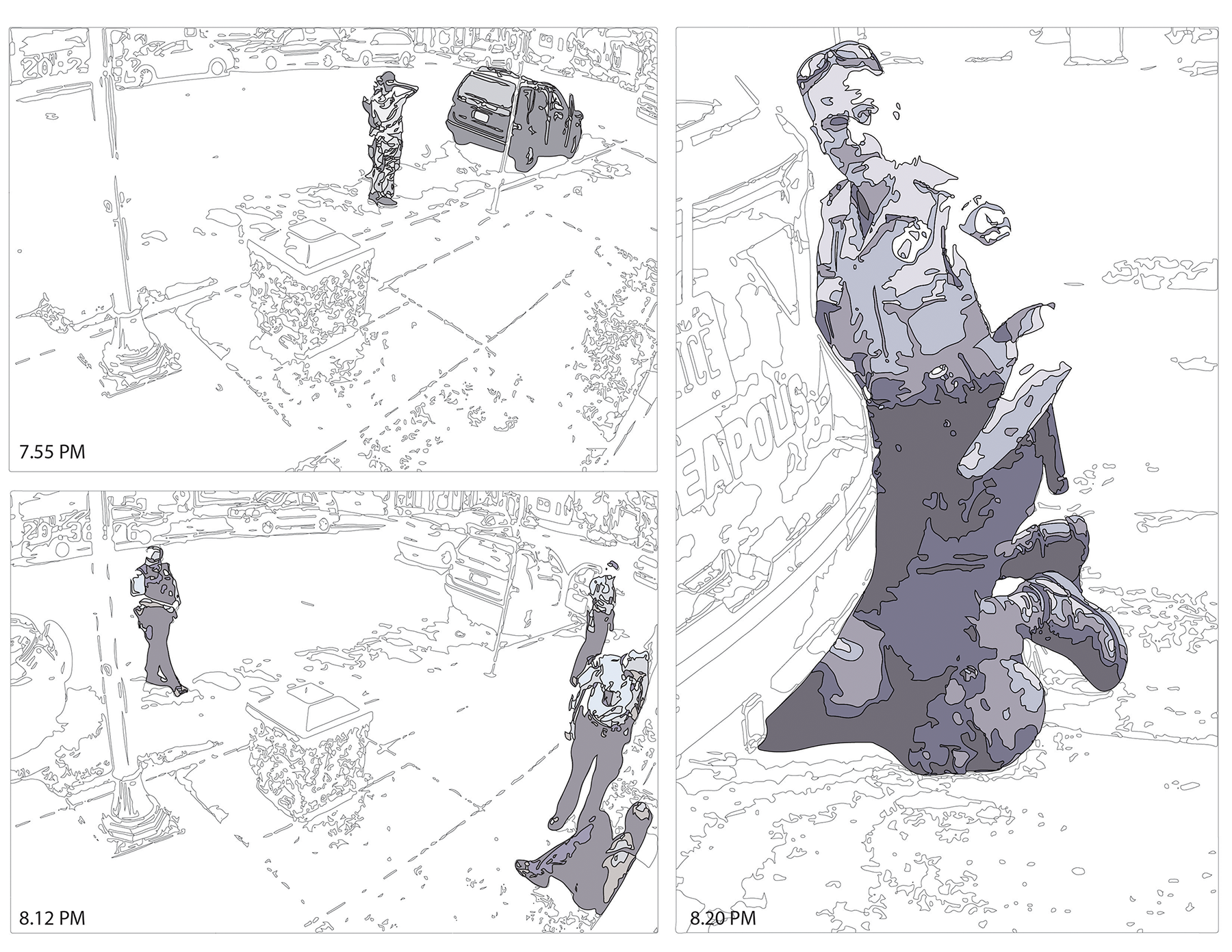 We contend that the spatial violence of defensive architecture, CPTED measures, along with historical racist land use controls such as racial covenants, and urban renewal projects such as highways, while not directly responsible for the death of George Floyd set the proverbial stage for his death.

George Floyd lived and died in a place that was sterile and hostile to members of his community. 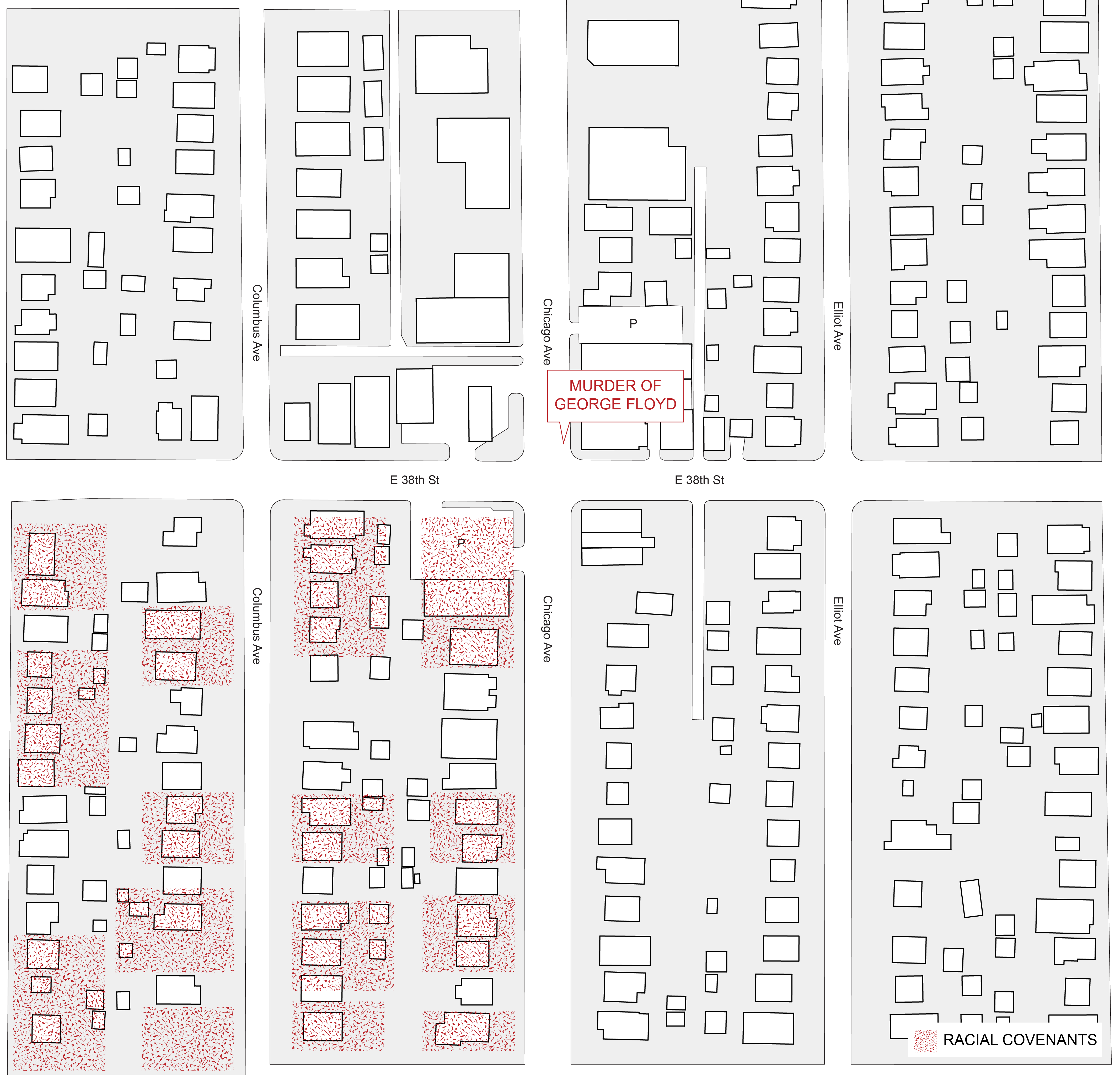 In the illustration above we have identified several deed restricted racial covenant properties in close proximity to the site where George Floyd was killed. Racial covenants were used to keep “undesirables” out of particular neighborhoods. Racist land controls such as these have been sited as a reason why minneapolis has one of the lowest rates of African-American homeownership in the nation. One can see the absurd and racist langauge covenants contained in an advertisement for property that was for sale in Minneapolis in 1919 the flyer states that these properties could not “be conveyed mortgaged or leased to any person or persons of Chinese, Japanese, Moorish, Turkish, Negro, Mongolian, Semitic or African blood or descent.” (Regents of the University of Minnesota, 2020) 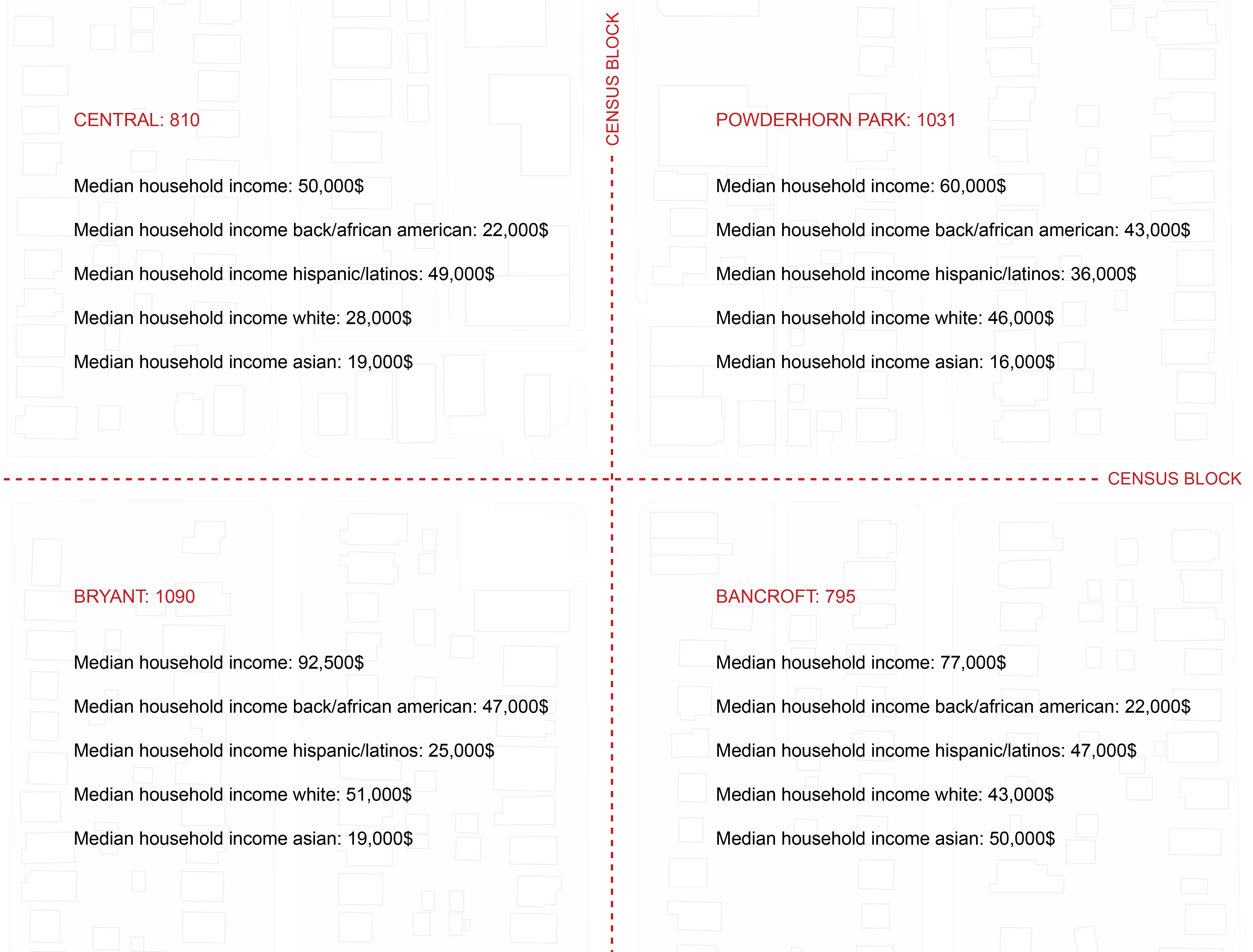 The area where George Floyd was killed is a very diverse area of the city. The site is situated on the border of four neighborhoods within the Powderhorn community. Although these neighborhoods are in close proximity of each other they have very different median household incomes. 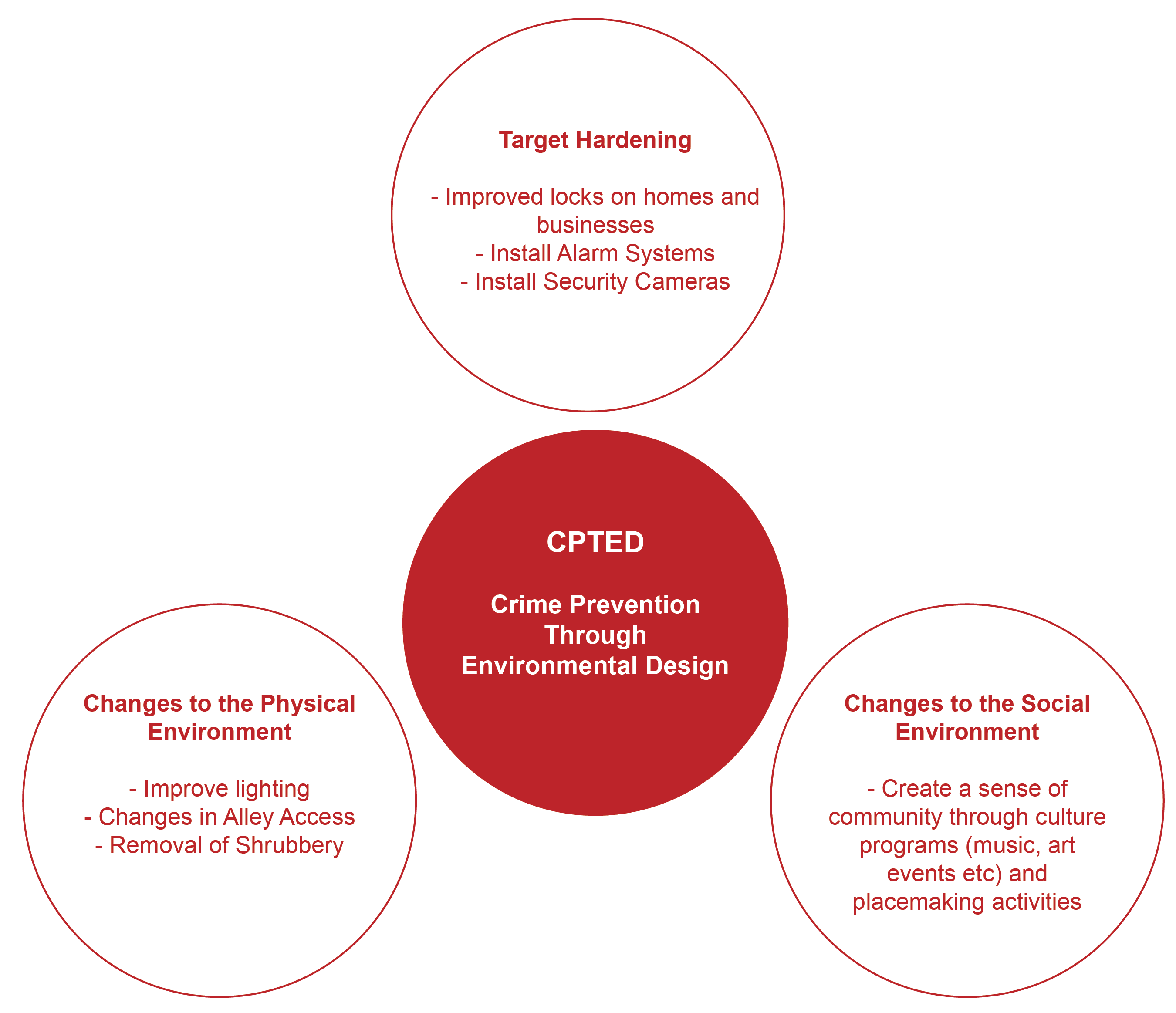 We contend that the spatial violence of defensive architecture, CPTED measures, along with historical racist land use controls such as racial covenants, and urban renewal projects such as highways, while not directly responsible for the death of George Floyd set the proverbial stage for his death. George Floyd lived and died in a place that was sterile and hostile to members of his community.

“CPTED is the proper design and effective use of the built environment that can lead to a reduction in the fear and incidence of crime and an improvement in the quality of life… The goal of CPTED is to reduce opportunities for crime that may be inherent in the design of structures or neighborhoods” (Crowe, 1991)

Now we will take a closer look at the intersection in question 38th and Chicago.

“The most effective areas for the Bancroft Neighborhood Association to consider implementing the physical change aspect of CPTED would be the commercial areas in and around the neighborhood. CPTED techniques should be implemented at the intersection of 38th and Chicago and at the Bloomington Avenue strip mall. A survey of residents has indicated that these are the areas that residents feel are most unsafe. Because there is little evidence to suggest that CPTED has an impact on crime rates, it should not be expected that the crime rate itself will drop significantly in these areas.” (Phillips, 1996) 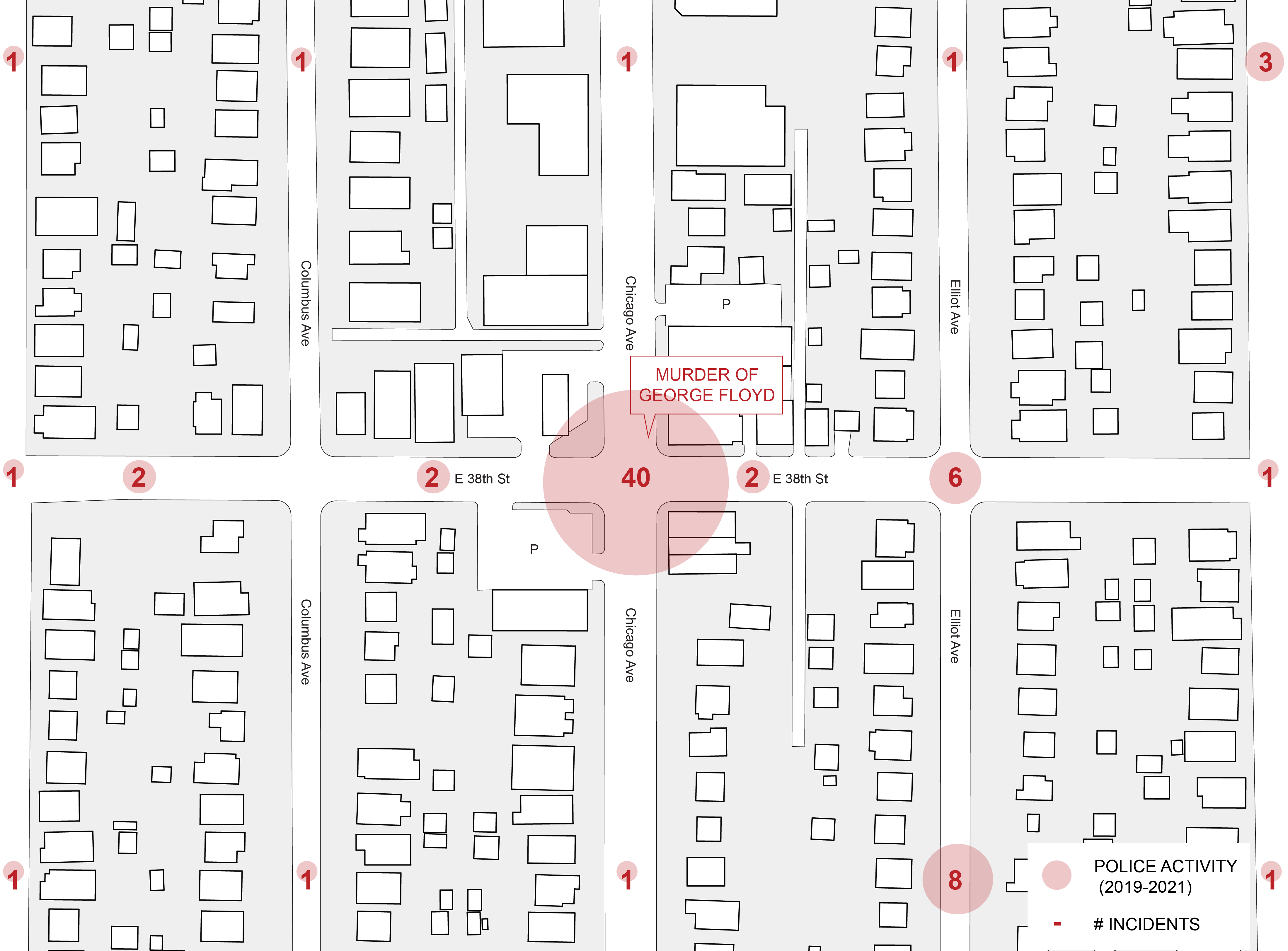 In 1996 a report was prepared for the Bancroft Neighborhood Association evaluating CPTED’s possible effectiveness in there community. Interestingly enough the report found that “many residents cited the intersection of Chicago Avenue and East 38th Street as an area they would feel uncomfortable being in at night. Yet the actual number of reported robberies that occurred in this area was quite low. Therefore efforts to combat vandalism and create more of an appearance of informal surveillance might be an effective means of reducing residents’ fears about these areas.” (Phillips, 1996)

Here we see Police activity at the intersection of Chicago Ave and 38th St where George Floyd was murdered. Our graphic shows the hyper police activity at the site of the George Floyd incident in contrast to other parts of the community. In light of understanding how the built environment heightens law enforcement activity, it was predictable to find data that shows that there are far more incidents reported to police at this intersection than the surrounding areas. 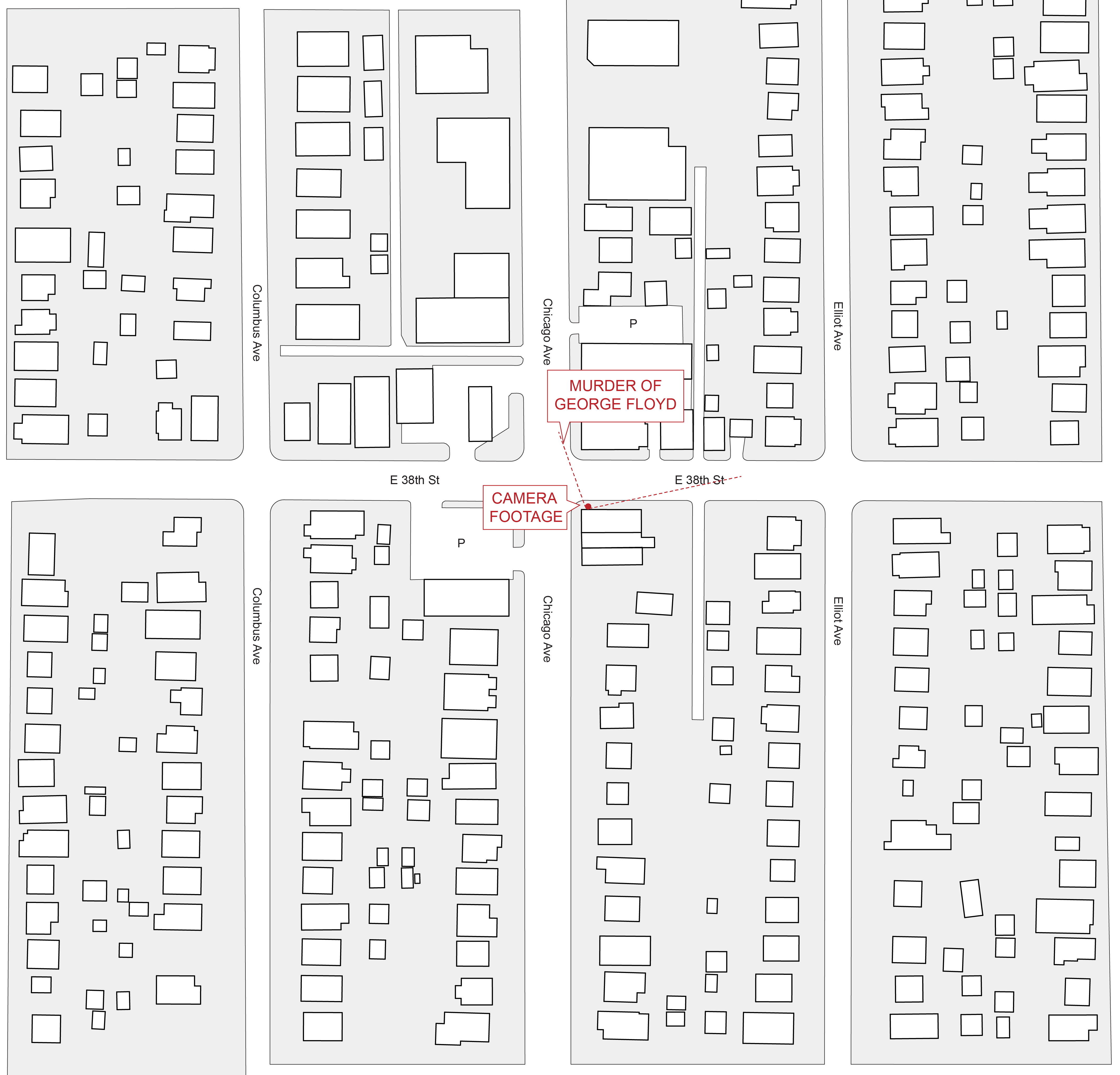 “The areas they are most concerned about are on the peripheries of the neighborhood, most notably at the intersection of Chicago Avenue South and East 38th Street. Business owners also do not see crime as a large problem, although their customers, who sometimes come from all over the Twin Cities, do have negative perceptions about the area. One of the most frequently cited problems is absentee landlords who do not maintain their property.” (Phillips, 1996) 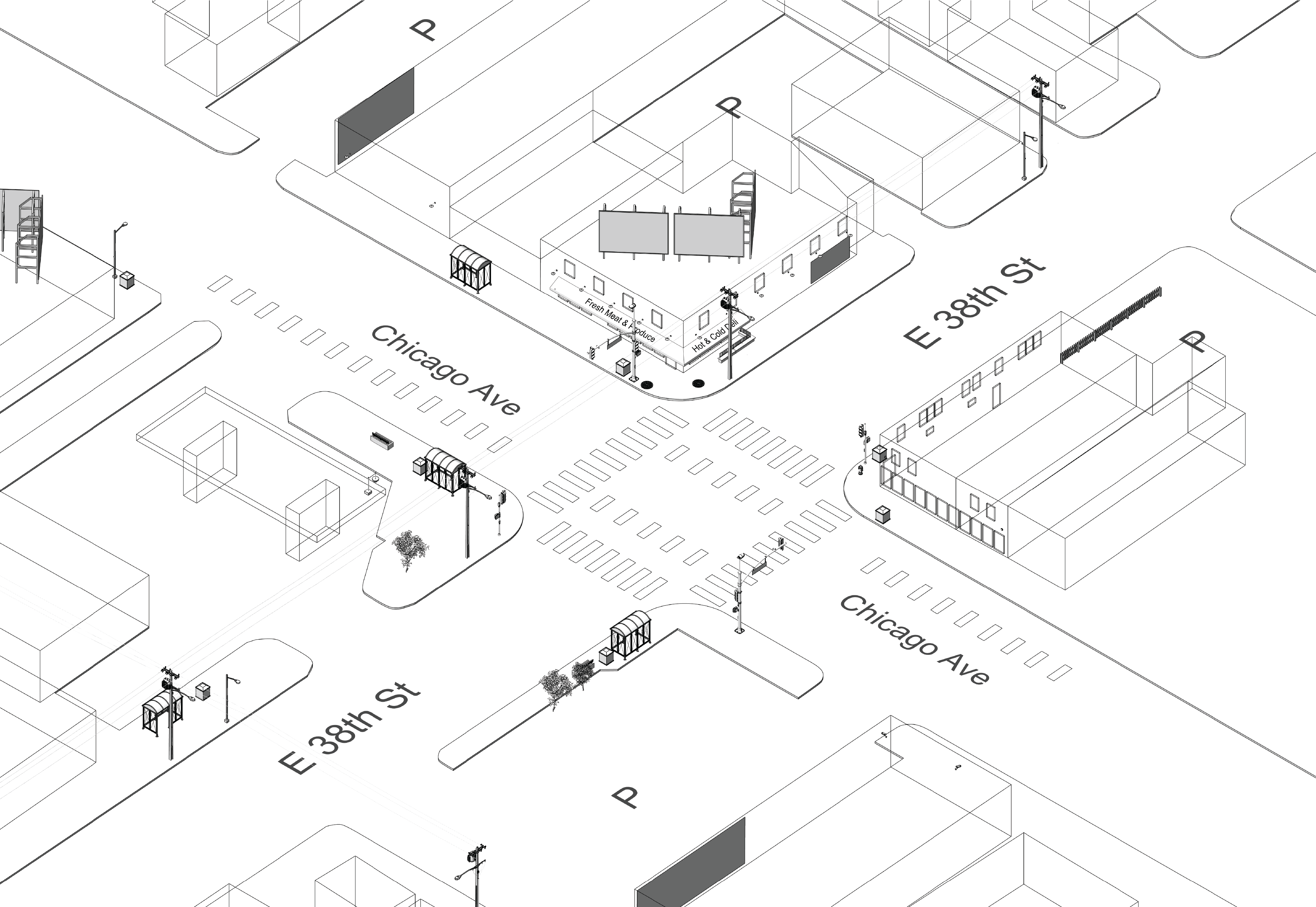 There are several element os CPTED and other anti-people design strategies that are reflected in the built environment at the intersection of 38th and Chicago.

Built primarily with surveillance, control and crime prevention in mind, the language used when speaking of target communities greatly contrast the language used when describing highly functioning and productive communities. Terms such as walkability, accessibility and streetscape are terms used when talking about people centered design methods as opposed to the terms that are used in CPTED literature such: territorial control, target hardening, prevention planning, defensible space and broken windows. 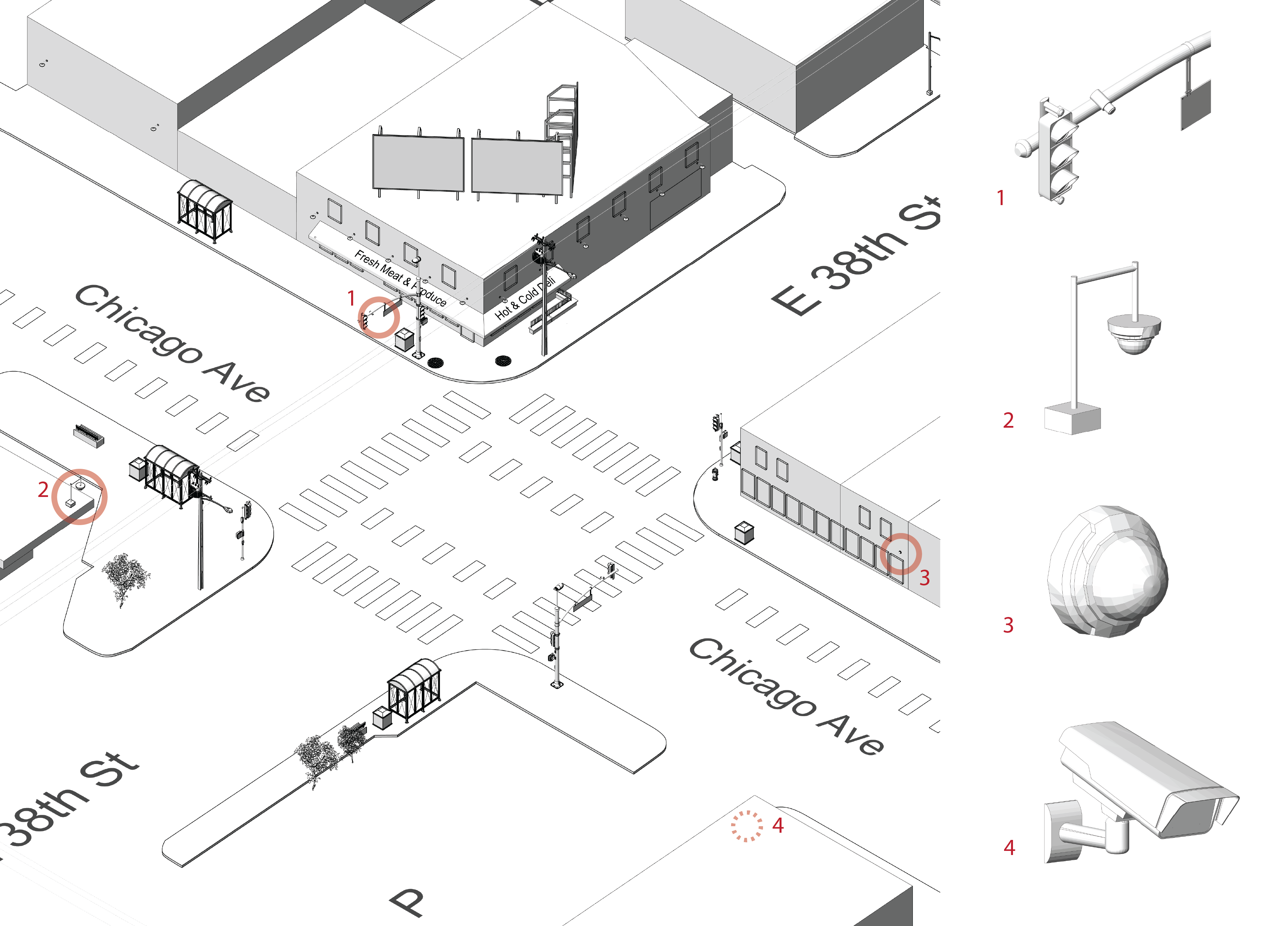 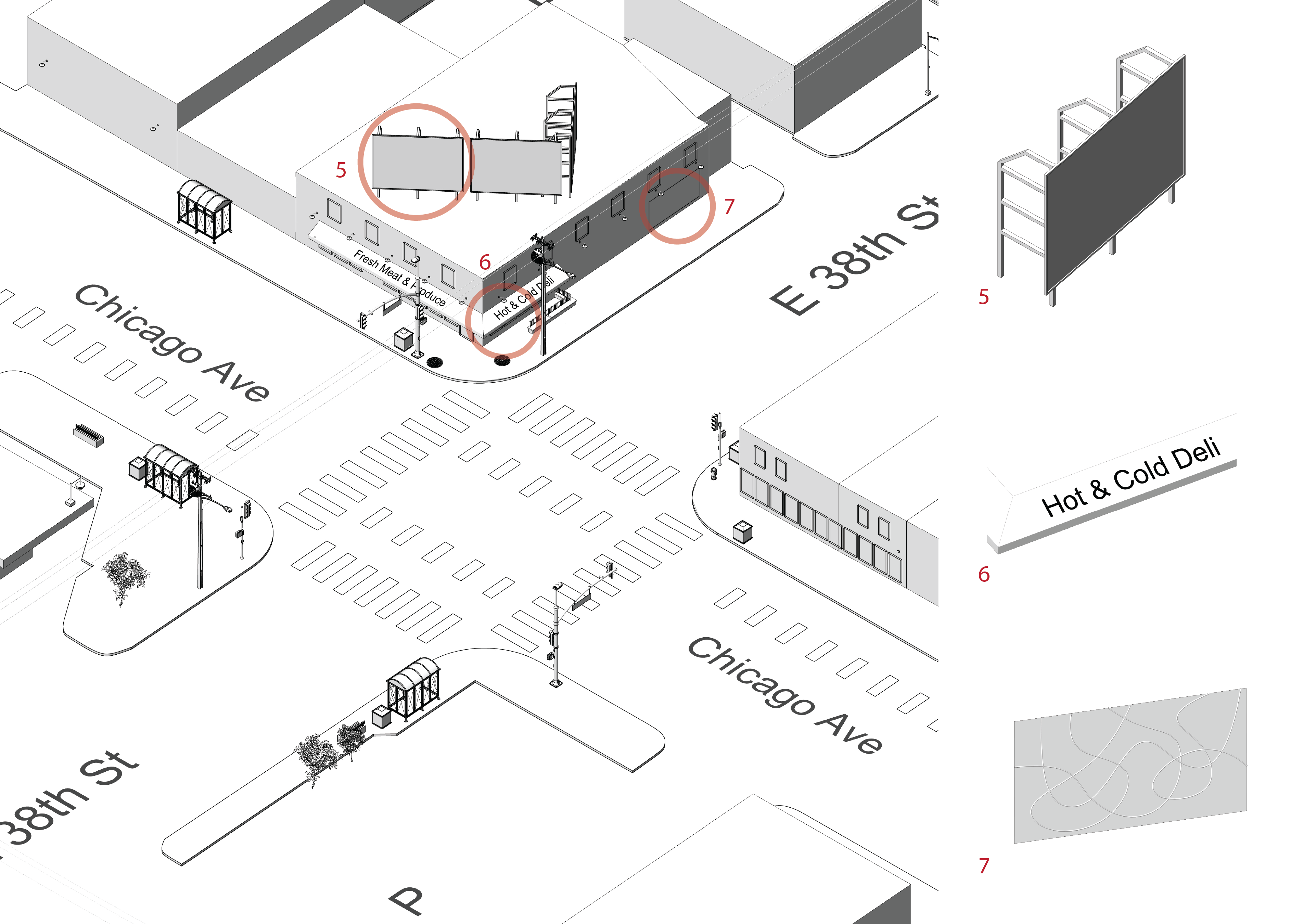 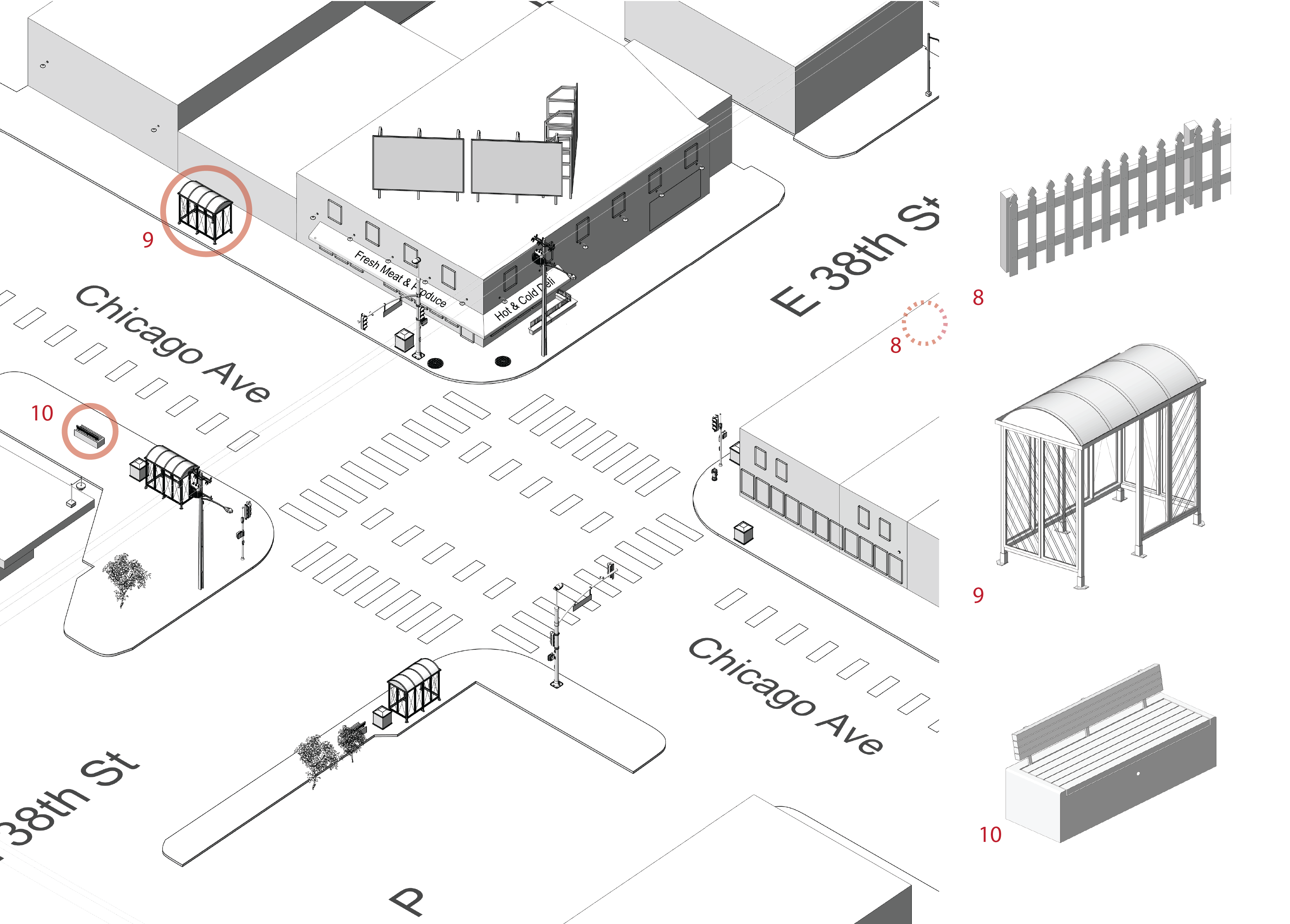 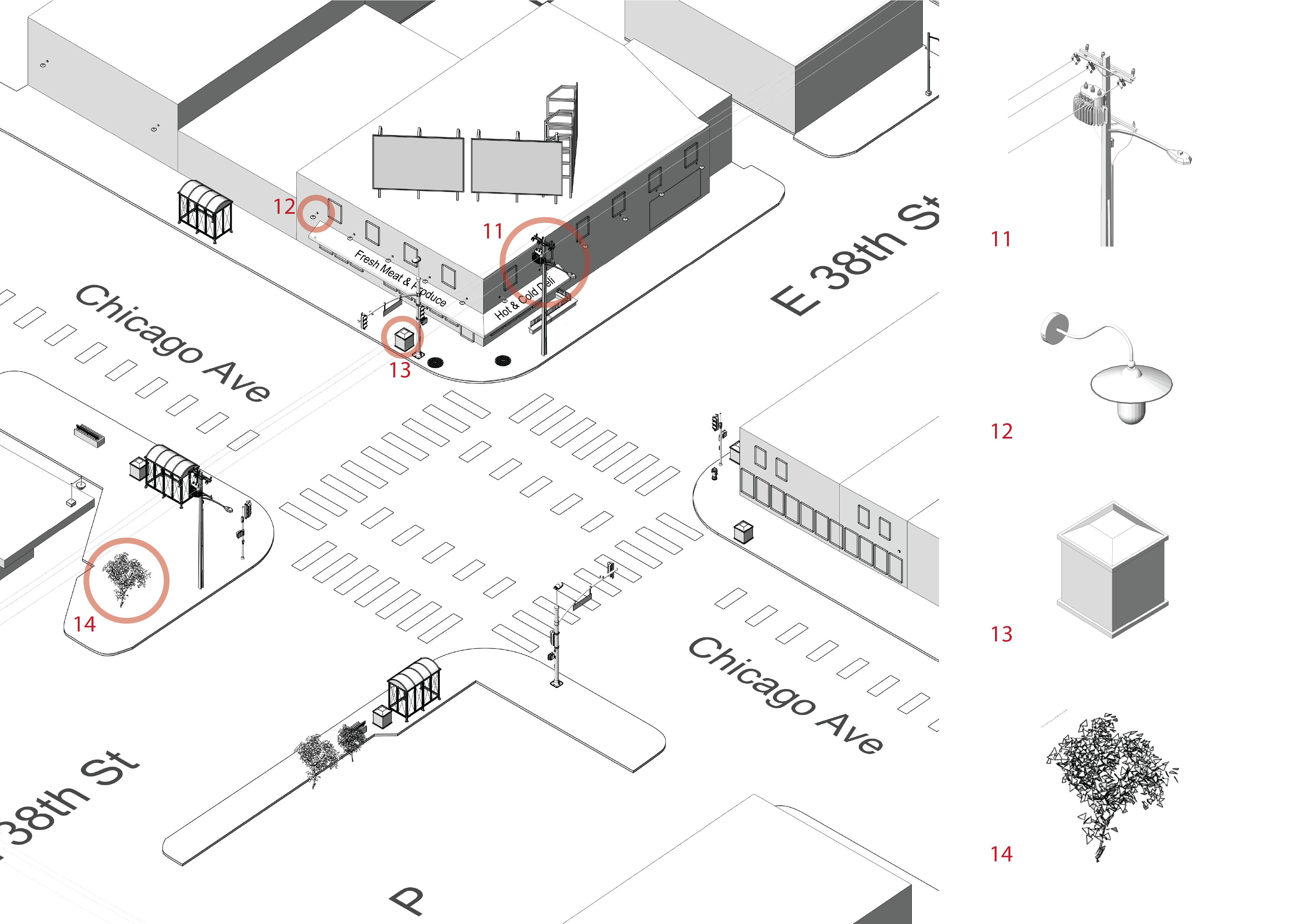